Main results of Genesis concern works on Petals ESB and the BPEL engine. 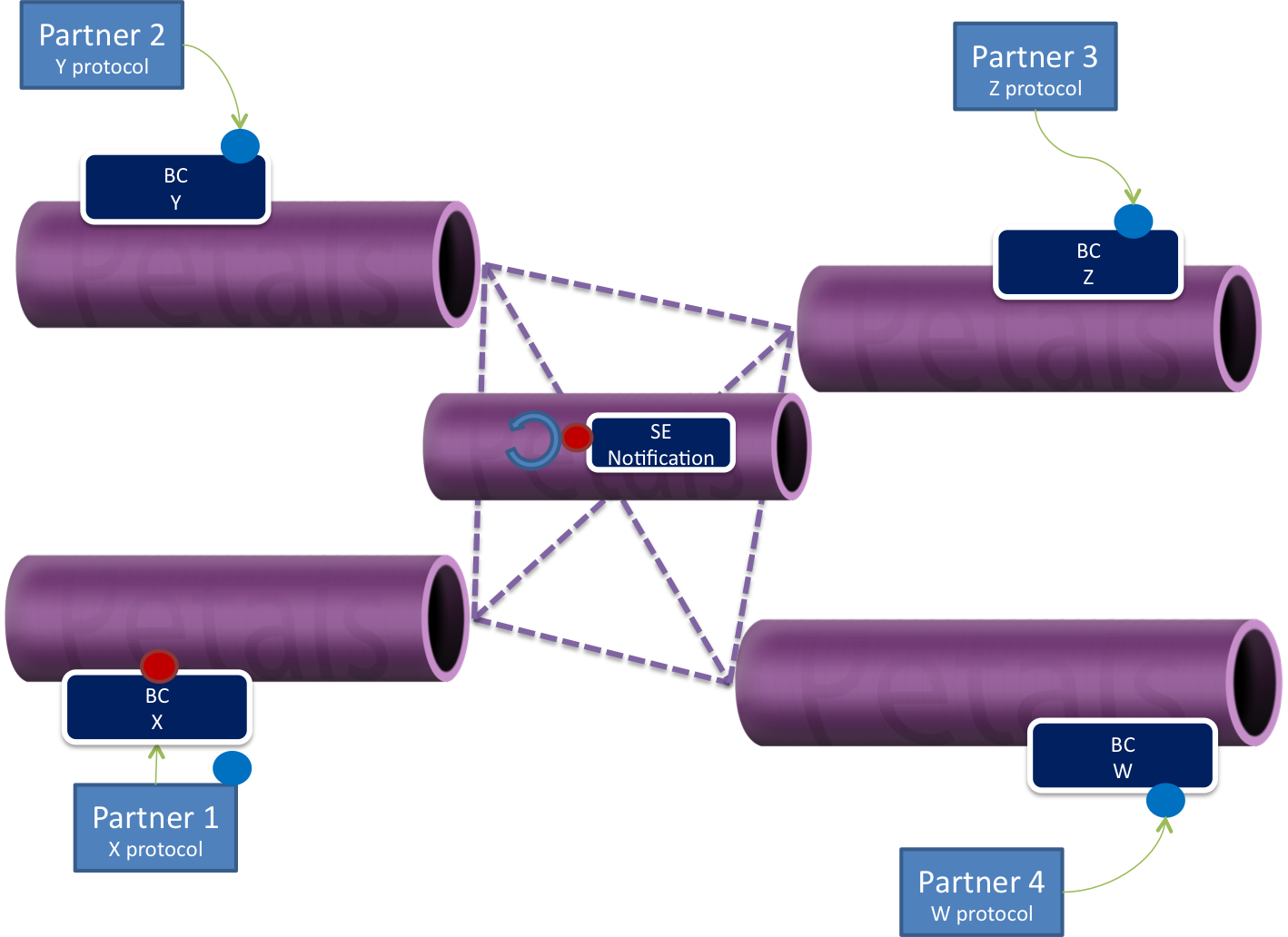 Partners 1, 2, 3 or 4 can either be consumers or producers of notifications. The se-notification is a broker managing and aggregating subscriptions and registrations.

These SAs are generally deployed onto the bus thanks to JMX connection. In the context of a BPEL process deployement, the following SUs are to be expected:

In the GENESIS context, workflow deployment is expected to be performed according to a specification (based on WPS). Basically it consists in a XML file containing WSDLs, XML Schemas and the BPEL to deploy. In order to be compliant with this mechanism, an additional administration interface (represented by the A blue endpoint in the figure) has been developed. It consists in an automatic generation of the SAs described above that is then deployed in a nominal way.

This is done thanks to a Petals ESB service extension (see the how-to for Services extensibility of Petals ESB (DSB?)).

EasyBPEL has been enhanced in order for the engine to be able to invoke asynchronous Web Service using WS-Addressing (see the how-to on EasyBPEL extended activity).

WS-Addressing is a specification from the W3C, defining basically means for Web Services addressing. It defines EndpointReference type and message information headers. The first construct contains an address localizing a Web Service. The second construct allows to correlate message exchanges between each other (messageID).
It is used in GENESIS context in SOAP headers of messages sent by services. In the following figure, WS-Addressing is used in the portal request in order for the BPEL engine to know where to send the final callback, and by the BPEL process itself in order to tell the Service A where to send the callback. 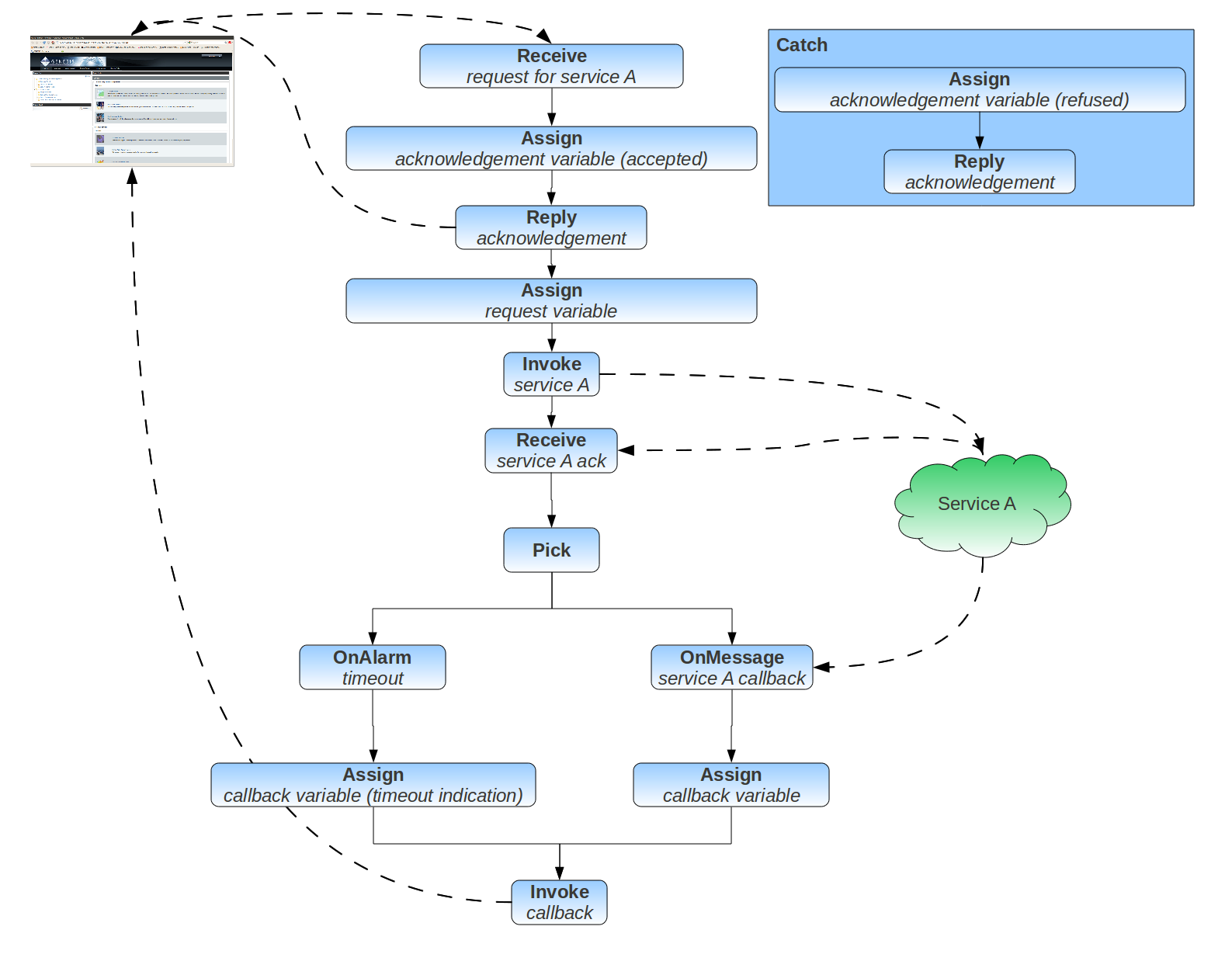 BPEL is represented as a set of nodes containing an activity:

This asynchronous mechanism of callbacks implies the use of metadata information in order for services to know where to send them. This is done, in the context of Genesis, thanks to the WS-Addressing specification, that will be explained in the next section. It allows basically to add callback address in message exchanges.

WS-Addressing is used in order to manage services asynchronism. It implies that the BPEL engine executing the workflow is able to send messages containing meta-data about callback address. It is done thanks to an extended activity developed upon EasyBPEL engine.
It consists in adding a specific attribute into invoke activities, corresponding to a variable containing particular EndpointReference (e.g a ReplyTo construct). This attribute is then used to build the SOAP header of the external message sent to the Web Service.
WS-BPEL extensibility is foreseen and consists in our case in the following extracts to add in the BPEL file.
First we have to define the WS-Addressing extension as following:

Then WS-Addressing headers have to be set. We use here the BPEL Assign activity:

We assign here a ReplyTo value to the rasterCallback variable.
Finally a special invoke has to be used:

The additional attribute header is used to add WS-Addressing metadata in the message going to be sent by the BPEL engine.

[GEasyBPMN] editor enhanced to provide BPMN 2.0 to BPEL 2.0 transformation (see doc on GeasyBPMN). This Web-based GUI allows to design geo-processing workflows with high-level representation. The transformation tools tries to automate this hidh-level description to an executable one. 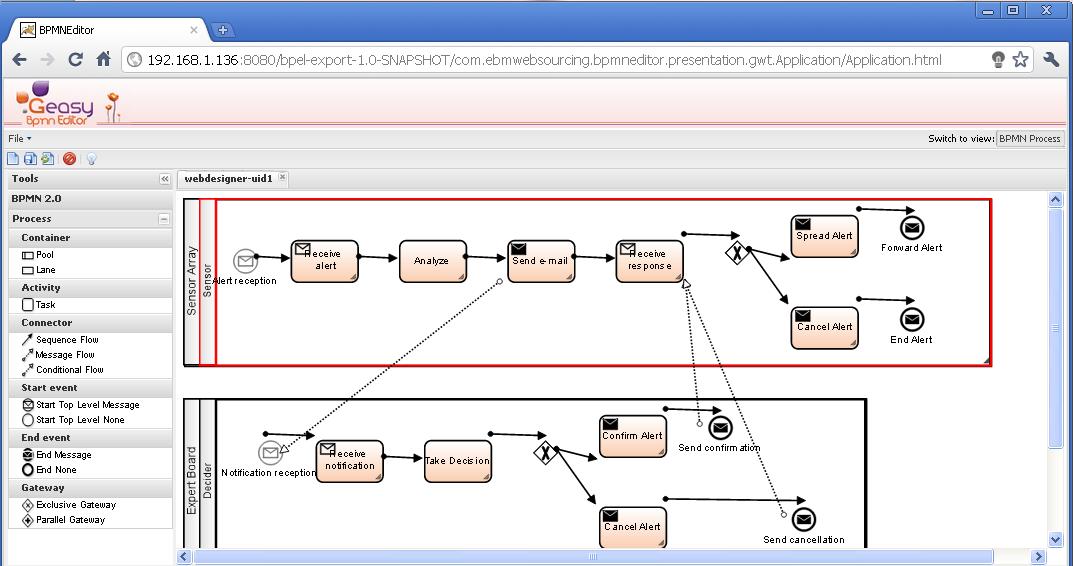